Frank is our 2009 grand master kite racing champion of the world (I know that’s along title but we like it anyway, looks good on paper if anything) and he will be reporting live (well, almost) what’s going on in each of the Cabrinha Race Series races this season and that starts with the 2010 season last Thursday, April 15th in Crissy Field, San Francisco. The usual suspects were almost all present. And our Franky is a happy boy since he just received his brand new custom racing board from grand master (this time shaper, not racer), Mike Z. (sorry but full last name is too diffilcut to both pronounce and write). So here it is. You can also find it in our forum, right here.

Here is Leprof with the first kite board racing report in the bay area of the season.

I took hold of my new baby : 6’0 x 23” with 4 Tuttle fin boxes Mike Z race board 10 days ago and I finally can ride it comfortably on both tacks upwind and downwind in light to medium wind ( have not tried it in strong conditions yet). I’ve been using my last year’s fin quiver which is not recommended while I’m waiting for Mike to pot some windsurfs course racing or slalom fins for me.

First day in Marina bay was, as expected, a disaster! (Chip Wasson had warned me ! )I tried it with my 10’straight Curtis fins in the front and 6’ in the back.  The board was railing all over the place and I could not go downwind with my feet in the straps. I swapped the bigger fins in the back and it was much better. The next day I went to Crissy field  and adjusted the back straps closer to the center of the board and tried the “hammer” 10 “Curtis fins in the back and was able to make it work. The following day, I went to 3rd ave and swapped the 6” with 10”in the front (with the 10”hammer still in the back) and was able to make it work with a single footstrap on the back foot. I was still having trouble to find the right balance spot during jibing both going upwind or downwind, but going straight was a lot more comfortable.

Thursday was the first St Francis Cabrinha series race of the year and 20 of us showed up on the beach at Crissy. Some thought that the wind would not pick up (right Eric ?) and decided to get some worked done instead of competing. I was planning to use my last fins configuration but Chip was nice enough to lend me a pair of 11” skinny formula repotted fins that I first positioned in the forward position. Boy, here we go again,I could not control the board as it was railing up especially on starboard tack and I was getting cramps on my left legs trying to keep the board flat. Changing the back foot straps from double to single did help a little but I was still falling every 30 seconds on all my downwind tacks. I finally came back to the beach and swapped the formula 11” to the back and the 10”Curtis in the front, and wow, finally I was able to ride the beast!

The wind started light but picked steadily all evening and I was well powered with my F-ONE Bandit III 13m. I added 2m extensions to my stock 24m lines and… I’ not sure I felt a difference. Supposedly it helps in lighter wind. I will add 2m or more next time to see if I can feel an improvement.

Race one I finished 7th after falling all my jibes! Compare to Chip (who has the same exact board, but different fins) I was not able to sustain the same angle upwind. I believe he had also a better board speed. I was able to hold the same upwind angle as most other racers (which means that the fins are working ok) but was going slightly slower than the best of them (which means that they are creating probably too much drag) .

Race two I finished 6th after an ok port start and falling half my jibes.

Race three I finished 10th after a bad starboard start and a missed upwind mark : the offset buoy had drifted upwind from the ebb and even though I barely made the yellow mark ( and bumping it slightly) I missed the “offset” orange buoy … arggghh!  I lost a lot of ground there of course and made it back slightly by staying close to shore and avoiding two more jibes on the downwind leg ( I fell only twice on the whole heat) .

I finished 8th for the evening (tied with Chris Brown but his better last race finish put him ahead of me) and a little disappointed. But I’m pretty confident that with more time on the board and more testing for the right combination of fins and foot straps configuration, I should be able to challenge the top local guys at least on some heats by the next race in two weeks.

Until then: A bientot les blaireaux ! 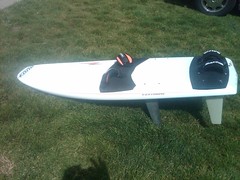 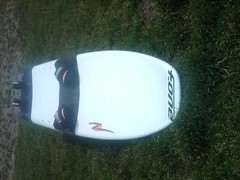 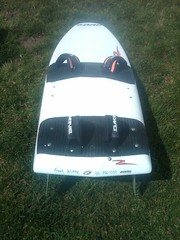 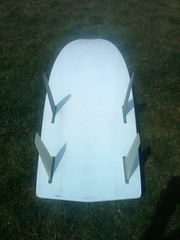