Blowing off the chain all day leading up to last night’s race. Thankfully though as we were all scratching our heads on how we were going to deal with all the pain on the water the wind backed down just slightly. By the time racing started the 25-30 knots had backed down to a very manageable 20-25 knots. The wind was a fairly north, so it was a backwards Crissy day, blowing on the inside and light on the outside. There was a definite lane of wind up the center of the course making for some nice tactical racing. Race One started with all but Johnny Heineken (1,1,1) and Joey Pasquali (3,4,3) starting on starboard. Johnny and Joey just squeaked across the fleet and headed out. As the fleet tacked out Joey and Johnny were looking launched, but as we got closer to the lay line the fleet inside clearly had more pressure. At the windward mark it was Joey, then Johnny but followed by Daniella Moroz (2,2,5) and Kai Calder (4,7,9) less than a second back. On the downwind most of the fleet ended up jibing at least three times to stay in the pressure down the center of the course. Stefaans Viljoen (6,6,6). Daniella stayed out side slightly farther and was able to get Joey on the downwind. The upwind to the finish was a bit favored outside and the finish line came quickly with the strong ebb. With the boat favored finish Seth Besse (5,5,4) was able to just sneak through a tack in front of Stefaans.

Race two the wind had really settled nicely and was perfect 9M racing conditions. Joey, Daniella Stafaans, Kai, Seth and a few others attempted the port start. Johnny wanting to keep things interesting pushed all the way down to the pin and started pin end on starboard. Everyone starting port had to duck most of the fleet before heading out. By the time the windward mark came around starting port still payed. A combination of the wind filling outside, more ebb outside and starboard advantage coming into the mark meant that the first 5 around the mark all started on port. Johnny as he does was able to catch up on the downwind reeling in Daniella inches from the outside gate.

Race three continued to die slightly and those on 7M and 8M kites began to struggle. Only Joey and Stefaans attempted the port start. Joey sneaking past Johnny by the skin of his teeth. Stefaans had to duck Johnny and Toni Vodisek (23,3,2) but made the rest of the fleet. At the windward mark the fleet converged again all pretty tight headed down the leeward leg. Stefaans and Kai both had spectacular crashes which let Seth sneak through easily to 5th.

Looking forward to racing with everyone next week at the Hydrofoil Pro Tour Stop here in San Francisco! 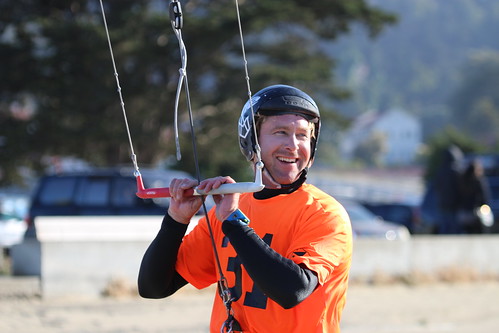