This is part two in a three-part series on the experiences of a wingsurfers guide through progression. We had a bit of a break in the wind here in La Ventana allowing for some rest and reflection. As mentioned in part one , I started this winging journey recently and wanted to pass along some of the experiences as new people learn about this exciting sport. Now, with roughly a month of solid riding behind me there has been a lot that has been learned and still more to know. I’m spending this season in La Ventana, a well-known kiting destination that I’ve visited many times over the past 14 years. It’s the perfect learning grounds for wing surfing. Coming from a strong kite surf background and focused purely on wave riding, I’m excited how winging has transformed my perception of a place like La Ventana that has “no waves”. This is true, there is very little in the way of “surf” here but there’s a good amount of deep water swell. Swell that can be easily ridden with a foil and wing which has made La Ventana, do I dare say it, a “surf destination” when viewed through the lens of riding swell with a wing and foil. A quick recap of my progression which started with the 7’6” Rocket Sup by F-one, a 1800cm Gravity foil and 4.2M Swing kite. After a few sessions and frustration with the longer SUP I went towards the other end of the board size spectrum to a custom 41L board that I’d prone foiled. Then to a 35L F-One Rocket Surf model which was fun but very challenging to water start unless there was a lot of wind. Next the smaller 5’8” Rocket Air inflatable was used which was a great transitional board and now in the past week I’ve managed to get my hands on the new Rocket Wing board by F-One that’s just coming out. The Rocket Wing range have four models from a 5’0”x 22” at 60L up to a 5’10 x 25” at 90L. These boards are specifically targeted towards the need for a board that will float enough to get you up on a foil with your wing easily yet maintain good performance. The exact model I have is a Rocket Wing 5’4” x 22” at 60L and I weigh about 160lbs. For the level that I’m at right now, the Rocket Wing board has allowed me more time up on the foil and provided the necessary stability to continue improving my skills. It’s much easier to get up on than the 35L/40L boards I was riding and creates a more direct and aggressive feel with the foil than the Rocket Air SUP inflatable which was a great tool in my progression. Much more compact than the 7’6” SUP I started on, the Rocket Wing has way less swing weight and overall felt really controllable. Here’s some more detail on positive aspects of the Rocket Wing based on my experience with the board. The ease of use and overall general stability on a number of levels. First, just floating on the board seems easier with a slower rocking motion thanks to the width, thickness, volume and bottom shape of the board. It’s stable while sitting in the swell, preparing to get up. It’s stable with a knee start keeping both knees parallel and pointed towards the nose when getting to your feet. It’s stable with a front foot up while still on a back knee during the transition to your feet and then when bringing the board up onto foil is also more solid. Another positive attribute is the volume and proportional outline of the board. It maintains stability during touchdowns onto the surface of the water when the wind would lull and I was able to remain standing and could get going again on a foil during these lulls much more frequently. On previous boards, even the SUP I’d often fall off as there was either too much side to side resistance or not enough on a smaller sized board. Tacking and jibing were also easier on this board. To date I’d spent most my time riding strapless toe side one way and heel side the other, never switching my feet. The Rocket Wing’s wider outline helped to compensate for poor foot placement. After only a few attempts I was able to switch stance much more confidently and maintain a better (heel side) tack allowing me to point higher upwind. Switching stance back to toe side and downwind jibes were easier as well. Portability, the new handle is genius making it much easier to manage the board in and out of the water. Unloading the board from your vehicle is simplified with the designated handle to carry the board from. This is the normal way to carry the board now regardless if I have a foil mounted or not. It just works really well and is positioned perfectly to offset the weight of an attached foil but also feels great when carrying with no foil attached. Getting over whitewater is easier by turning the board upside down, paddling the board with foil in front of you and placing one hand in the handle (it’s on the bottom of the board) to guide the board. This works really well and you can literally steer the board with the handle as you paddle out. Even with a harness on with the spreader bar hook I found that positioning myself further back with the harness off the back (nose) of the board made getting out a snap and no more swinging foil of death in the air in front of you every time you hit a whitewater or go over a wave.

Standard features on the entire Rocket Wing line are well thought out. The pads are super comfortable even after hours of riding. The twin track (4 bolt plate) system works effortlessly and accepts most foils. While being relatively thick to create volume, the board feels good under your arm and is really light for its size. It’s much easier to carry into the wind when on the beach or loading on a car than larger boards. I’m spending a ton more time up on the foil and getting up much easier as a result of the Rocket Wing design. My progress has come a long well over these few weeks and the Rocket Wing made much of it possible. I love to tinker with different size boards, foils and wings and in the last few sessions I opted to go back down to the 5’0” 35L Rocket Surf and found that I can now get up on it much quicker compared to my earlier struggles. As with many sports the more time, the more progression the more you can finesse things as you get better and that seems to be exactly the case when I tried the smaller boards once again. A few things I’ve learned along the way. Make your life easy with this new sport. There’s equipment out there that’s really well designed for winging. The sport in general is relatively new and personally I have tried dozens of combinations of boards, foils and wing sizes. Fortunately, I have access to a lot of equipment that most people don’t but even after all the trials and tribulations, it would have been easier to wait until gear like the Rocket Wing board was available. It’s suited exceptionally well for the average wing surfer. Whatever equipment you end up on, play with the settings and adjustments. Even very small adjustments like moving your foil forward or back a 1/16th of an inch can make a huge change. Once you find that optimal foil setting, mark it with a permanent pen. I mark my boards for different size foils as well. Try shifting your feet further up or back. One thing that I really focused on was to see how light of wind I could ride in. During these sessions I fine-tuned my foot placement and could eek out slightly more efficiency by bringing my back foot directly over the foil and moving my front foot just a hair further back. This is no white caps near glassy conditions. And in those sessions even the tiniest shift of weight will stop you from foiling. The time I spent fine tuning my stance really made a difference on my normal wind days and made me a more confident rider during lulls. Go out and have fun! As with anything there will be good days and bad days and wing surfing is no different. In the early stages of learning you will get worn out quickly with all the getting up on the board, falling and going again. Even if you’re a quick learner and master it day one, your arms and other muscles will get tired since they are not the same as the muscles used for kiting. There are weeks here when the wind simply doesn’t stop for days. If your addicted to this sport like me, that means two and sometimes three sessions a day or one really long one. After numerous days of continued sessions, you simply can’t maintain the same level as you can when well rested. Mistakes become more frequent, frustration grows and you don’t have nearly as much fun. So don’t forget to take a break, recharge and rejuvenate yourself in between sessions. Hopefully you are out there wing surfing and getting the most out of this great new sport and if not it’s certainly worthy of a go. Stay Salty! 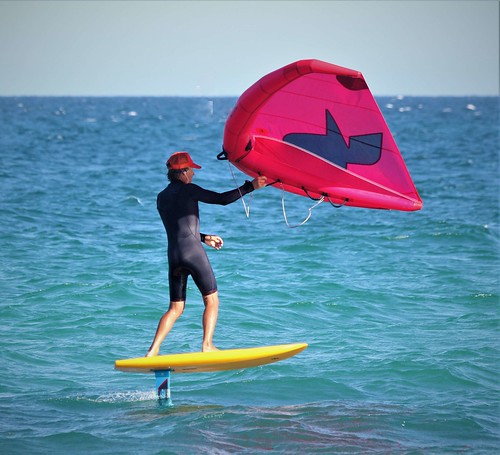