John Hadley’s Diary on Battle of the Bay 2018 Edition The weather Saturday was less than ideal for racing and lucky for everyone this year’s race was on Sunday. Saturday still saw lots of action in the Bay Area with clinics by pros being done everywhere. Florida born Maui resident and F-One team leader, Josh Riccio hosted a clinic Wednesday night and again Saturday for racers looking to up their games. And up them they did!

Josh’s clinics are straight and to the point. He doesn’t go on and on telling you about himself but rather he listens to what you need and helps you with that. The speaker on my phone about blew up when Phil told me how much Josh improved his starts.

Speaking of starts, Sunday started with an amazing sunrise which meant no chance of rain. Then, it was time to get to the site and get your preparation started. Finally, it would be off to the ‘big start.’ Before the start, though, there was socializing and pretending nerves were everybody else’s problem.

Big names come from all over to do this race and I’m not just talking about Florida fitness legend, Mark Athanacio. Connor and Zane slipped in from Maui, Ty Judson skipped over a few islands to get here from Australia. Olivia Piana decided this was a great reason to finally see the Bridge Golden (so stated with a cute French accent, of course). Closer to home, Kristin Thomas and Tyler Bashor made the drive up from down south to enjoy the view. Returning to his roots where everything started was the Flyin’ Hawaiian, Ryan Funk, who dazzled spectors on his foil after the race. The race, that’s right that’s what we were here for.

The new setting at Aquatic Park had a serenity about it that didn’t let racers see the bump and current in the bay so who needed to sweat that? Racing commenced with the short course which saw competitors heading out of Aquatic Park and then around a buoy at St. Francis Yacht Club before coming back. (Full biased disclosure here: My nephew Luke Hadley rocked it out there on his first race!)

The Open Course took off right after the surf skis and OC’s went ripping out of the gate. Right from the start none other than 101 Surf Sports very own David Wells took the lead and, well, he never relinquished it. There goes the surprise ending.

Since this was the race I did, I had a great vantage point of the action from 6th place up. At the start, it was fourth place but I decided to go for a swim with the seals just outside Aquatic Park and never regained momentum. Regardless of where I was, it was fun watching Pete and BB battle for second followed by the Silent Giant Barry Wicks and Mr. Steady, on his F-One 14×23.5, Joe Naholowa’a. Nipping at my heals were Chad Raugewitz, Elijah Schoenig, and Mark Athanacio.

David never let off the gas so the race became for second and BB, Pete, and Barry duked it out all over the Bay. It was a fair race. No one drafted so it was skill, determination, reading the water, and a bit of luck that would prevail. Joe and I trailed a bit behind never losing site of our goal but not quite attaining it either. Finally, Barry overtook Pete but at the same time, roughly 100 yards across the water, BB made his move and the standings were set.

After coming in and settling down, it was fun to see the field finish out and then watch the big guns come in. Rounding out the open class was Phil Tressenrider (who just a month after turning 60 took the Masters title!), smoothie making legend John Walsh on the 2019 all water, third woman finisher Jen Fuller (who took the Masters title for the women!), and SF’s wind surfing machine on his return to racing Jean Rathle motored his 12’6 to second place in that division. Solid finishes for the F-One crew.

Look out for next year. Josh has convinced me that training works. Come join one of his clinics when he’s in town. When he’s not in town, Jen Fuller is and she does fantastic trainings every week to keep Bay Area paddlers in top condition. 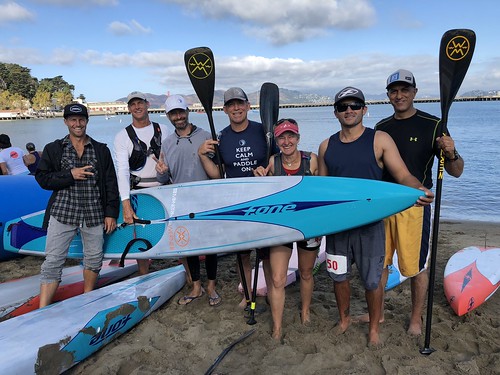 It was tough to see much of the Pro Division as they took after after the Open Race. Plus, if you consider I didn’t see the Aircraft Carrier go by – yes, that’s right, an Aircraft Carrier – a boat so large it not only carries airplanes but is large enough for them to take off and land. And I missed it. Didn’t even see. Heard about it afterwards and saw it in photos, but never saw it. Neither did Pete. And here’s the odd thing, there are photos of David, BB, Barry, Joe, Chad, and Mark with glimpses of, if not the entire, Aircraft Carrier in the photos. So that’s why I don’t know what happened there.

I do know at the end that Josh and Peru’s very own Itzel Delgado had an epic battle from the end of the pier to the finish because I saw it happen. Josh thought he was clearly in 6th when he heard some water slapping behind him and he saw that Itzel was right there and he put on the gas. He floored it and beat him by .43 seconds! That’s less than half a second. Holy smokes. Seconds later Josh was found at the water gasping for air saying, ‘See, Hadley, that interval training works.’