Jean Rathle takes his new 7’11 Matira Inflatable on one hell of a tour around the South Eastern USA! Follow his journey and find out why this board was the perfect travel companion. The options are endless from foil surfing to wind foiling to even a little fishing!

And to think that I almost left for my trip to the east coast without my new toy. The F-one 7’11” Matira Inflatable foil board made a standard family duty vacation turn into a foiling Safari. The adventures would not end I tell you.

The backpack style bag was very convenient. Not only did it pack the Matira with all its accessories, but I was able to stuff the foil, a tow rope, some tools, and a few extras in the bag with it. Shrink rapped and ready to travel. It started with 2 days of SUP foiling on the beaches of Jacksonville, Florida with my nephew Zavier giving the Matira a try. NO PROBLEM! he said. Well, he didn’t exactly foil it but for a beginner, he had no problem paddling it around outside the 4 to 6′ surf zone. As for me, my mind was blown. Weighing in at 210lbs, I had no problem paddling the board out in challenging surf conditions. After the initial getting used to the characteristics of an inflatable, it was drop-in time. The Matira Foil board catches a wave pretty much like any other board and the quad fin set up engages and allows for a quick carve to get up on the shoulder and prepare to foil. I do believe that the bounciness of an inflatable allows for some forgiveness in catching a wave, not to mention when your body hits it after a foiling crash. In the waves, the board offers stability which allows the rider to set up for the foiling experience which is now up to the foil to deliver.

The next day I went back to Jax Pier this time to catch up with JD Motes and the sup locals. The waves were a bit smaller, but it allowed me to share the Matira with JD and some of the other riders who loved the board and caught a few waves to complete their sessions. Everyone had an easy time with the new 7’11 Matira.

A few days rest to attend Pascal, my other nephew’s graduation from Jacksonville University and it was time for some Windfoiling adventures. My first attempt was in the waves of JAX Beach once again. Rigging up the F-one 7’11” Matira with a 6.6meter sail and my surf foil in 15 mph conditions, I was not sure what to expect. I do have a few years of wind foiling under my belt, so I can tell you with confidence that the Matira does the job for a traveling foiler! With a surf foil attached, it was a matter of finding the right foot placement and a couple pumps of the sail and we were off on a foil. Pure joy and success as I admired the clear blue water and the beautiful view of Jax Beach from off shore, not to mention the giant manta ray that breached just in front of me.

Day four of the trip was simply the best. Windfoiling just a few miles north of Jax’s Beach at the famous Hugenot Park Lagoon. A favorite spot of our very own F-one team rider Billy Ackerman. Rigging up the same sail and foil, it was 2 hours of bliss. At this point, I was glad that I made a stop at the F-one shop in Sausalito to pick up my new traveling companion. My last day in Florida and there’s got to be something else we can do with this inflatable foil board. Right! Wake foiling! We lined up a boat in the St. John’s river and hit the boat wakes on the Matira once again. Grab the tow rope, stand-up and go. That’s about all it takes behind a boat. The inflatable offered a stable platform which allowed you to focus on popping up to a foil with confidence. For the beginner Zavier, it was all about taking that chance and after a few glides, popping it up was the biggest challenge. Another bonus session on the Matira. So glad we packed it with us for the trip. Good by Sunshine State, off to Louisiana!

Hello, Sportsman’s Paradise. Yes, the Louisiana swamps was my next adventure. After a solid few days of eating some southern delicacies, it was time to burn some calories. This time is being yet another nephew, Nicolas, who was equipped with the goods. His 16′ John boat with camouflage paint job and a 25 hp outboard engine was the ticket. It was all we needed for the best experience of the whole trip. An early morning fishing trip provided for some relaxation from the evening’s festivities at the Thibodaux Fireman’s Fair. In this glassy swamp, casting a line from the comfort of the F-one Matira was not a problem. With the abundance of critters in the water, catching a few snacks was not a problem. The only problem was avoiding becoming a snack. This is Gator country and I can assure you, they were watching us. As we wake foiled along the bayous of Lake Boeuf Wildlife Management area, those sneaky creatures were hanging out on the banks wondering what strange activities these humans do.  After some sport fishing, it was time for action. Pop on the hydrofoil and let’s get cooking. Nicolas was quick to learn and after a few falls, he was up and going on the foil. If you ever take a trip to Louisiana, a swamp tour is a must and don’t forget your F-one Matira inflatable foil board, it’s a must have!

Y’all come back now you hear! 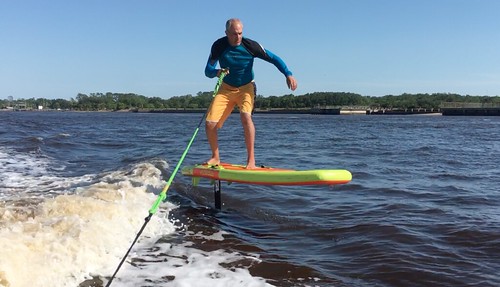