After an intense week of racing with a strong fleet of local, national and international racers, among them F-One team racers Connor Bainbridge, Joey Pasquali, Seth Besse and Noah Runciman (U19), we are thrilled to report that Conno finished on the podium of the Hydrofoil Pro Tour / Formula Kite Event hosted by St Francis Yacht Club at Crissy Field Beach. F-One’s Connor Bainbridge finished 3rd overall just after Parlier and before Johnny Heineken, Seth Besse finishing 18th in the pack and Noah Runciman in 16th for the HFPT results and 7th in the Formula Kite registered gear division. Noah is also under 19 years old (U19) and if there were a class for the young guns, he would be first! Watch out for our up-and-coming riders because they are aiming for the top! Thank you again to all event organizers and supporters. Connor was riding latest F-One Diablo V4. Noah was using Diablo V3 in the registered gear division. 22-25th of August the St. Francis Yacht Club will welcome the fastest kite hydrofoil racers in the world to the 2nd stop of the 2019 Hydrofoil Pro Tour in conjunction with the North American Championships. A big and super fast fleet is expected to attend.

San Francisco Bay has earned its spot at the heart of kite racing being one of the windiest locations in the world and also the birthplace of kite racing. 2019 will mark the fifth consecutive year that the there will be high end kitefoil racing on the Bay, following stop Mexico and then Mauritius and France.

Racing will occur just off Crissy Field between St. Francis Yacht Club and the Golden Gate Bridge. For four days, kiters will foil at high speeds around the Bay, hovering three feet above the water as they slice silently through it. In addition to the notoriously voracious breeze, these athletes will battle challenging currents and tides. This year 4 race days will feature course racing and one will be a long-distance “SF Bay Challenge” that will test competitors’ strategy as well as stamina. 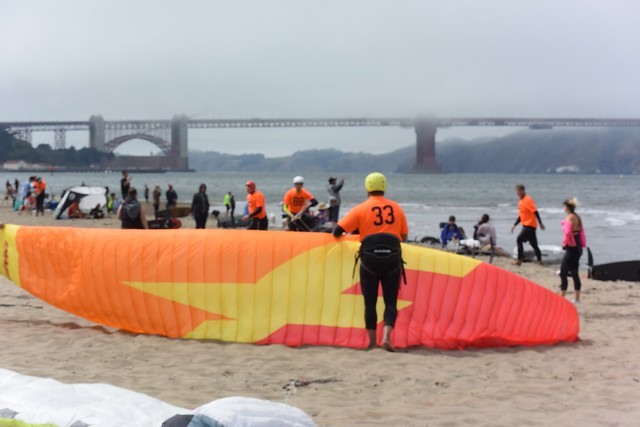