I got my hands on the new Delta kite from F-One, a kite designed for progression: The Revolt 3 size 13 m.

I got the kite out and looked at the bar. It has straps for depower and power (Bandit has depower rope with clam cleat)

If you are an advanced rider you might like to have the cleat but if you are just starting kiting the strap system really works for beginners. The bar has the same velcro release like the Bandit III. Later in the day, I found out that my student liked the strap system. For some reason it’s easier for a newbie to remember that one strap is for depower and the other one for power.

I inflated the kite. No one pump system – which I like. The main bladder has a stopper ball on the inflate valve, same as the struts. So after you inflate the kite you don’t have to worry to put your finger out on top to not loose air. I never understood why the Bandits don’t have the same type of valve. Maybe next gen?

Looking at the kite these were my first assessments:
– the kite is fatter in the middle, very much similar with the original Bandit
– the bridle system seams longer (actually it is the same length as the Bandit 3 – what is different is that there is not a top separate bridle like on the B3 on the upper area, meaning the main bridle line is longer.)
– the construction quality is the same as any F-One product – awesome workmanship and finish

The wind was light when I took the kite out. There was another kiter on a big Flysurfer and a lite wind board. Besides that everyone was waiting for wind. 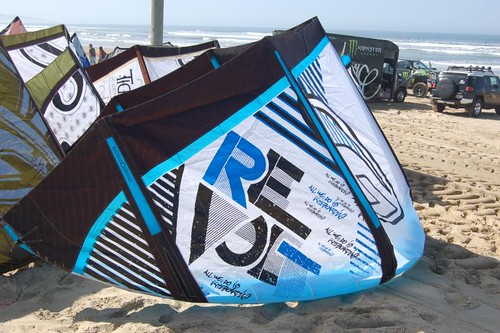 I think it was around 10 MPH. I put the kite up and dove it for the waterstart. And… I was up… If you are working the kite, you can build board speed and actually ride. And to my surprise I made it back to the same spot where I started.

Jumping is not the same as the Bandit III. The kite is slower in the turns and I think has a bit more bar pressure but I think it does have a better low end than the B3. It seems to be a compromise between the 2009 Revolt and 2010 Bandit 3. It was a very similar feeling like the Dos from last year. It goes upwind really easy and is very, very stable up in the window. Still jumping is really easy as well and the kite is fast enough if you want to do some shy kiteloops. I used it to teach my girlfriend on it and she did like it more than the Bandit III, due to the fact that it was easier to relaunching and slower than the B3.

The wind started to pick up up to 22 after a while so at that time I thought that I reached the top end of the kite. I think I could have pushed it up to 26 but I wanted to get back on my 10 m B3… A short recap:
– great low end
– slower than the B3
– more stable
– awesome relaunching due the delta shape (better than the b3)

Things that I will change:
– Even know this year the bag is a real bag, I think they can improve it still, folding the kite and trying to fit it in the same bag is a pain. No side zipper on the bag.